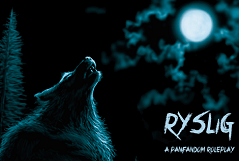 It's the mash, it's the monster mash

You awaken on a hard, uncomfortable bed in a crude hospital room. A single dim lightbulb with a pull-string switch flickers above you. Your clothes are soaking wet, and you're covered in scratches and bruises - thankfully, all minor enough to heal on their own, although you can't shake the feeling that something is wrong with you.

When you are released from the hospital, the townsfolk will look at you with a mixture of fear and pity. Almost anyone will help you if you ask, but some will gently encourage you to try and find shelter elsewhere. If you're lucky, you'll run into someone like you who can explain what has happened. If you're unlucky, you'll run into someone like you who is already too far gone...

Ryslig is a panfandom journal roleplay with the basic premise that characters arrive and slowly begin transforming into monsters. There are also a couple of meddling gods, a number of Muggle natives with varying levels of haplessness, a mysterious horse-headed guy in the woods, and an ominous recurring fog. Can be found here

Tropes relating to specific characters can be found here.