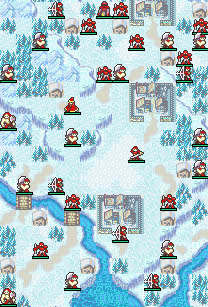 Approximately half of the enemies from level one of Chronicles of the Holy War.
"Wait, is this the first level?"
—Everyone
Advertisement:

Set in the original fictional world of Etheril, Fire Emblem: The Rune of Shadows

is a forum roleplay that follows many traditions present in the Fire Emblem franchise of video games (and then subverts them) while introducing some game mechanics not present in the series. Like in any Fire Emblem story, a great evil dominated the land in the ancient past, before it was ultimately banished by the efforts of a band of powerful heroes. Five hundred years later, one of those immortal heroes, now accused of treachery, returns to Etheril to fulfill his own dark and bloody prophecy. Naturally, the Player Characters are not too happy about it, and decide to stand in his way.

The original story, Fire Emblem: Rune Of Shadows, was planned to be divided into several lengthy 'books'. The first book of the original roleplay is centered around the so-called 'Raven Company', a part of the Levarian Resistance that fights against the invading horde of 'barbarians' called the Kregeans. Needless to say, the odds are not in their favor, so they must find something special to win the war - namely, the ancient runes of power; ancient artifacts crafted during the darkest of times. Through a magical infusion, these runes give greater power to both weapons and spells, giving the Resistance a decisive advantage over the overwhelming force of Kregeans. To complicate things a bit, their 'ally', the Weracian Alliance, learns of these forgotten stones and demands more than a fair share by threatening to break their pact unless Levare hands them over.

The prequel to the original story, Fire Emblem: Rune of Shadows - Chronicles of the Holy War, starts more than 500 years before the beginning of its predecessor. It is centered around the regiment of North Milirin in the Grand Etherilian army, a ragtag band of mercenaries and militia recruits trying to stamp out banditry in the northern reaches of the original Grand Etherilian Empire. Much to their chagrin, they get wrapped up in something much bigger than themselves.

The following tropes make an appearance: