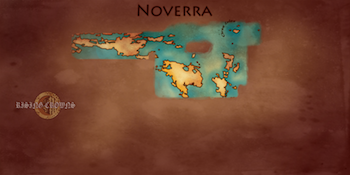 Eons ago, the world was a bare and lifeless place until the two gods, the Sun and the Moon, gave it life. Eventually, they became jealous of their creations and descended to their peaceful world to join them.
The goddess of the sun even bore a child: Inferio. His birth revealed unmasked their identities and they returned to the heavens where the child could not follow, for he was only half-divine. He was cared for, honored as a king, but as he grew, so too did his dissatisfaction with the "perfect world". He developed followers and sin spread across the land as they waged war against the heavens. Eventually, he was sealed into The Underworld but the damage had been done: civilization was all but destroyed.
Advertisement:
500 years of slow, painstaking healing passed until the seeds of civilization again took root in a sheltered archipelago tucked away in a corner of the world: the Orsa Isles. This is where our tale begins.
— The history of Noverra up until the year 500 AI.

is a Real Time DeviantArt-based fantasy roleplay in which members join as citizens of one of the fledgling kingdoms of the world of Noverra. Currently, the kingdoms available are the Immortal Goblin Empire of Karsh and the Aomori Empire. While there had initially been a third kingdom, the Kingdom of Arden was absorbed by Karsh.

The group is split into 3 parts: roleplay, story and a Risk-style game that the monarchs of each kingdom participate in via weekly moves to explore, conquer and develop various parts of the world as it gets discovered. The world of Noverra is moderated by the Gods, while the monarchs administer their own kingdoms.

Members complete quests given by their monarchs (or other members) to earn stars, which strengthen both their character and their kingdom. Members can even create their own kingdom, should they earn enough stars. That's just scratching the surface. For more information, check out the dA page.