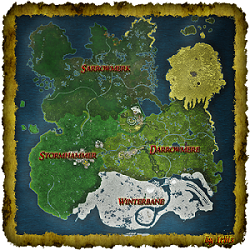 "Even now, in the year 93 of the Second Era, that grand and dark throne sits empty. That exalted chair, the cause of so much bloodshed and scheming. Quiet it sits in it's great hall, waiting for someone worthy."
"Only time will tell who that may be. When we once again witness..."
"The Rise of Kings."

A (now defunct) Minecraft Roleplay server originally founded by imjoebaker, Rise of Kings was one of the most consistently active communities as far as fantasy roleplay goes. Though various locations have gotten the spotlight, the main focus of the server is the continent/island of Elysion, a land of elegance and varying climates, shared by four primary provinces or Kingdoms. In Borealis, the sort of capital of Elysion itself, sits the grand Obsidian Throne, the most coveted seat of power in all four realms. Whoever takes control has essentially rose to Kingship, thus explaining the title.

While player-written lore has diversified things immensely, the original server concept was inspired heavily by Game of Thrones. The dynamic of multiple provinces opposing each other over a central seat of power existed as one of the main political foundations, but these days you can also find a not too unfamiliar world map, various magical and fantastic creatures, and plenty of roleplay-formed history and character names to learn.

This server provides examples of: