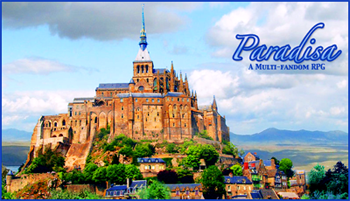 Welcome to Paradisa. Kitchen's on the first floor.

is commonly referred to as a jamjar panfandom with an overarching world plot thrown in now and again. It tells the day-to-day story of people stuck in a sentient castle that is feeding on their souls and sometimes makes residents 'lose' things. Sometimes these losses aren't really 'losses' at all, unless you count the loss of sanity...

This article is always under construction as players/characters come and go. Feel free to add any trope if you're a member of the community, but please don't change the layout coding I've set up. If you don't know what you're doing, just ask!

This Journal Roleplay provides examples of:

open/close all folders
The Game
The Muns
The World

The Plots
The Characters