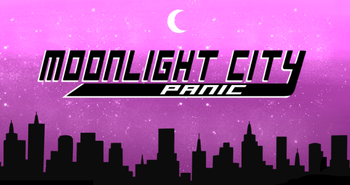 “CONGRATULATIONS~!! Your lucky class has won itself an all paid expense trip to the luxurious city Tsukishima. Yaaay! From entertainment to nightlife, there’s little you can’t do here! We hope you enjoy your stay and experience everything our wonderful city has to offer! After all, you’ll likely be staying a while… Keheheh~”

Moonlight City Panic is a 20 person Tumblr-based Danganronpa roleplay group. A class comes to on a spacious tour bus, unsure how they arrived there in the first place, to find themselves in the lap of luxury - the city of Tsukishima! With their friendly host and homeroom teacher, Ivy Yosano, there to guide them, there's no way this unexpected field trip could go wrong... right? But when things take a sinister turn, what will the students do? Will they find a way to escape?