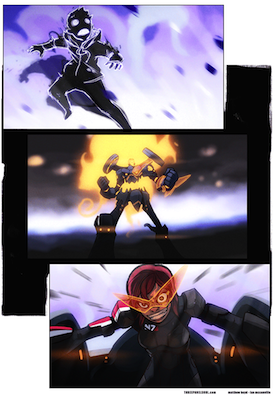 How Specious seems to plan on playing the game.
"John, things have a tendency explode around you."
— Commander Shepard

is a Play-by-Post Game hosted out of Creative Freedom, and run by the users Specious and Anansi. Merging the Mass Effect universe with the Exalted setting, the game runs parallel to -and often overlapping with- the main storyline of Mass Effect. The game was inspired by the Glorious Shotgun Princess, and begins at roughly the same point: namely, Collectors blowing up an Alliance ship.

Only thing is, this time the Collectors are blowing up a run-of-the-mill warship. And doing so happens to Exalt John Del Pilar to the Zenith Caste. Aaaaand piss off the sleeper-cell Infernal Scourge Donovan Esone. Things pretty much go downhill for the Collectors and their Reaper-Neverborn bosses from there.

Shoutouts and references tend to be a staple to posts, especially when Specious is involved. Ostensibly he and Anansi are college students, but they tend to make quite a few dated references.

Specious and Anansi have stated “the plan is to play out Mass Effect 3 Exalted style, then play the Citadel DLC as 'Casino Night'. From there we hit a Reclamation arc, then start setting hopping. Home-Shard exalted, Gunstar Autocthonia, Warhammer 40k, anything is possible once you have access to the Well of Urd.” Thus far they have begun the Genophage mission, working alongside Shepard to emancipate the Krogan Female.

There have been five players total so far, but only Anansi and Specious have remained constant. One player dropped out due to time issues, one quit due to a lack of interest, and a third just joined recently. Time will tell if the pattern will continue.

Codex Post that gives some background to the setting