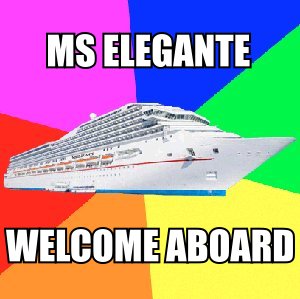 is a plot-driven panfandom and O.C. Roleplaying Game with dark, mature themes and occasional horror elements. The word "occasional" is used as lightly as possible. MS Elegante is a Journal Roleplay that may or may not take place on a boat, a boat that may or may not contain characters, whose worlds may or may not have been destroyed. Perhaps. Elegante is one of the most horrible, torturous game on LiveJournal, and we are perfectly content to be known as such.

The captain is a great man.

Tropes in this roleplay include: