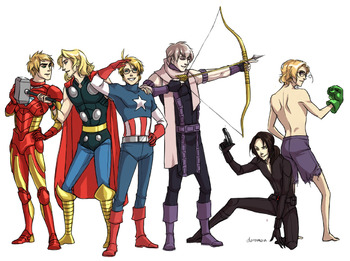 is a Hetalia AU Tumblr-based roleplaying environment set in a large mansion in the mysterious 51st State - oh, and they all have superpowers.

Residents come from all over the world, from celebrities to business people to (generally) normal everyday citizens. The 4 paths are based around the standard archetypes for characters seen in popular fiction - Heroes, Villains, Anti-Heroes, and Neutrals.

Legion of Hetalians provides examples of: