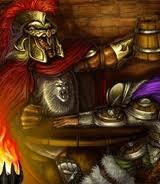 is a browser-based, free-to-play Western RPG from Australian company Rowdy Baron Games and it launched on May 16th 2008. The game is set in a High Fantasy world, divided up into various locations such as The Ashpeak Mountains and The Bravaki Wastelands. Player characters can come from one of three separate factions; The Mountain Kingdoms, The Steel Empire and the Deadlands, and adventure through the locales of the game world via a browser menu. All player characters are based out of the titular Dragon Tavern, located central between each of the three factions territories. Player activity is curtailed by a set amount of Action Points, which are spent to travel to a location from either the tavern or the location the player is currently in, to adventure within a location and to travel back to the tavern. Each character receives 25 Action Points per day, and these may stockpiled up to 250.

Character creation is based on the selection of one of the three factions and then one of eight classes for each faction. Classes are either ranged or melee specialists or hybrids of the two. All [[Player Characters PCs]] and Monsters have abilities within the game's TOAD system; (Tactics, Organisation, Attack, Defence) and Skills which modify their tactics. Combat functions by comparing a character's TOAD abilities and with their opponent and modifying based on the character's skills, level compared to the opponent and the quality of a character's equipment. Each of the TOAD types; ranged, melee, magic, stealth, solo, armour, etc. has an opposing TOAD style that it's particularly weak against in defence and one for which it's strong in attack; e.g the Group Organisation style receives a bonus versus opponents using Solo, but suffers versus the Monstrosity Organisation style.

The Mountain Kingdoms are a traditional fantasy kingdom with Elves and Dwarves and the most standard RPG class set; Storm Lords (mages), Infiltrators (rogues), Moon Elf Rangers, Moon Elf Cultivators (druids) and Dwarven Berserkers. The three kingdoms (human, elf and dwarf) are bound by the Treaty of Three Lords to put aside their enmity in the face of external threats.

The Steel Empire have a significantly Steampunk flavour with their Sanctioned Alchemists and Steam Crafters with Steam-powered Golems, but also have faint overtones of Warhammer 40,000 with their God-Emperor, Inquisitors, Zealots and zero tolerance attitude to non-humans and mutants. The Empire is xenophobic, technologically advanced and views witchcraft and magic as blasphemous. Were it not for the threats of the various monsters of the lands, they would be aiming to subjugate the other realms.

The Deadlands are a society based around necromancy as a means of survival. The entire country was nearly wiped out by invasion and only mass-necromancy by the ruling Gate Council prevented the Deadlands population being exterminated. Necromancy in various forms has become and entrenched part of life and culture in the Deadlands. Deadlands classes include; Necromancers, Dark Puppeteers and the ever-popular Death Knight.

Dragon Tavern uses a Microtransactions system through which players may purchase varying amounts of in-world credits which can be exchanged via the Shady Dealer in the Tavern for various items, some providing permanent advantages such as trap avoidance and increased loot drops or for single use infusions of extra Action Points.