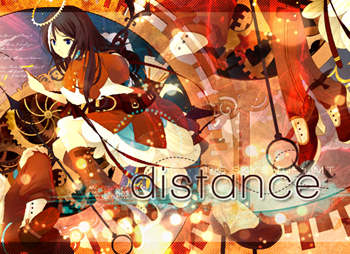 Welcome aboard the Calliope.

Distance, formerly known as Sky's the Limit, is a hybrid Steampunk and Age of Exploration roleplay on Gaia Online. It was originally created in June 2010 by -xx Cheshire D u S K and Lewmu, and it is now run solo by the latter. The new version was released in May, 2012, and has been running strong ever since. The in character thread can be found here

and the out of character thread is here.

The island country of Romalia originally developed steam technology at the turn of the century to accommodate the massive increase in population, but two discoveries would change the lives of Romalians forever. First, the development of steam powered airships opened the door to exploration abroad into foreign lands like Kakarou and Gulphi. Second, while digging a foundation in the capital, workers unearthed the gigantic and mysterious Water Diamond. After its discovery, scientists found out that unlike other islands, Romalia was a free floating island that was locked in place by this artifact. Since then, the Water Diamond was placed behind maximum security in its cavern. The Romalian citizens felt secure that the Water Diamond was under close guard.

In the year 1427, the Water Diamond disappeared from its heavily guarded cavern. Some say it was the work of military mutineers, and others believe it was the work of Sky Pirates. As the country sunk gradually into the treacherous ocean, Romalia's government drafted every available airship to find it, equipping each with a capable crew and sending them on their way. The story follows the luxury airship Calliope and her crew on a seemingly impossible journey to save Romalia. The newest version, Distance weaves this conflict into a war between the known world's most powerful countries.

No relation to the 2018 racing game, or the Utada Hikaru album.

This roleplay contains examples of: