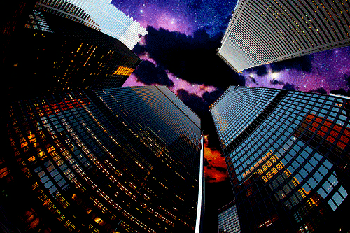 “Welcome to Hive City."
"My name is Rima Hoervich, and I, along with my coworkers, are conducting a little social experiment! And you’re a part of it! Exciting, right?"
Advertisement:

was a panfandom role playing environment set in a large city that could not be found on a map. Citizens who were brought there would have soon discovered that they were to partake in a social experiment designed by a group of unknown scientists. Labeled as mere lab rats, these subjects were expected to participate in strange experiments so that they may have been studied and influenced.

It was the largest panfandom group roleplay on Tumblr, boasting an average of over 500 active members from over 200 different series, ranging from live-action TV shows and anime to video games and webcomics. It also allowed for the inclusion of original characters.

The original run of Citta Alveare lasted for about a year, from July of 2011 to June of 2012. It then went on hiatus until it was restarted in February of 2013 with some new info and rules. The group was disbanded abruptly towards the end of June of 2018, after some contention between Citta's founder and its mods. The remaining mods then went on to create a new group, Isola Radiale.

Related blogs included the masterlist, a separate roleplaying blog for the scientists, housing and character requests, and Cittavision, a television-like feed which provides information about weekly events in the city.

The Sectors, Sub-Districts, and Outer Districts provide examples of:

The specific tests provides examples of: