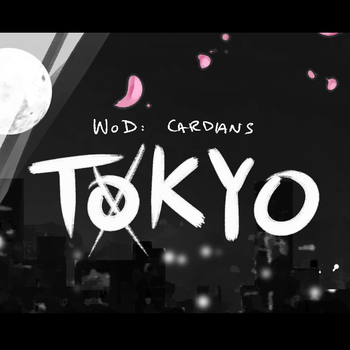 Kagome, Kagome...
"I knew it. Everything is just one great big fucking Anime conspiracy."
—Haru, summing up the entire campaign.

The Cardian Syndicate is a custom Hunter Conspiracy within the world of White Wolf's New World of Darkness: Hunter the Vigil game. Cardians are members of a global criminal organization named so after their ranking system, which divides members into suits and numbers. They fight against supernatural creatures and monsters in order to protect humanity, though their methods may not always be 'lawful'.Tokyo, Japan. The city where the old and the new, nature and science, tradition and technology meet.

The Tokyo Division is located under a clifftop shrine overlooking the sea, surrounded by a thick forest. The division was once prosperous and busy but has recently fallen into ruin, understaffed and always short on money. The resident Ace of Spades keeps a close watch on all recruitments, paranoid and adamant that the division only hire the best of the best.

...And then one August, within a space of a week,a ragtag bunch of seven misfits end up on their doorstep. One each day.

Thrown into a criminal underworld full of monsters that go bump in the night, the Tokyo team must band together to fight for their new 'family'. And much like one can find the odd Shinto shrine nestled between two Tokyo skyscrapers, the enemies of the team range from traditional Japanese folklore monsters to modernized Yakuza, mixed up with a healthy dose of horror and a dash of pop culture references.

A character page is in the works.This campaign’s overarching plot is notorious for continuity and foreshadowing, and has been described as pretty much a massive pile of plot twists. There are many unmarked spoilers ahead.