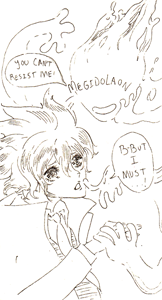 If you can resist, keep on going like a boss.
"All truth is simple... is that not doubly a lie?"
—Friedrich Nietzsche
Advertisement:

Time has gone out of hand. It has strayed far from its natural flow, resulting in many strange abnormalities. The dead have come back to life, years have been lost and locations have merged. The Shadows that plague the earth are as restless as ever and their nests have become fruitful once again...

But no one seems to notice. Everyone has gone on with their daily lives as if it was as normal as ever. They do not notice how Gekkoukan high has received an amazing amount of new students, no one notices the new department store Junes was not there before... all but a select few.

The ones with the Potential. The Persona users.

Their minds are foggy, but they can feel it. Something is wrong.

Something is very wrong.

is a Play-By-Post roleplaying game set in the Persona universe, in the year 2014.

The plot follows a time distortion that has brought together Persona Users from different timelines, along with the areas of Iwatodai, Sumaru and Inaba becoming easily accessible through trains. The Dark Hour has been brought back, along with Tartarus and a new dungeon to conquer, Yggdrasil.

The site was ongoing for at least two years, with one restart, and eventually lost interest around 2012.