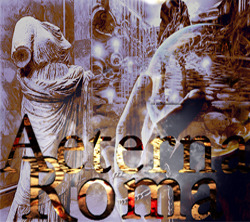 Aeterna Roma – Eternal Rome.
"Welcome to Rome, the Eternal city. In a place where the streets are running thick with wine, blood, scandal, ambition, and lust, events happen so quickly that rising to power one day and falling the next is expected. Sweet words, honeyed speeches, and purses of money might milk your way to the top, but one wrong move and it's all over. This is a place where one forges alliances to survive and where enemies can seem as friends until they stab your back. A place where lust and wine are entwined so quickly that marriages are made and dissolved in months. A place where the new young Caesar fights his own Senate for power while trying to find those he can trust.
Where will you go in such a place as this?"
Advertisement:

is an Alternate History play by post game set in Ancient Rome. Aeterna Roma began in April of 2008, the idea of creators Kate (who has since left us) and Gothic. It has gone through many changes over the years - such as new administrators, new servers, and, of course, a myriad of new players. Nonetheless, many things remain true for AeRo. The plots stay fun and original, the staff stays friendly and helpful, and the member-base keeps growing.

Along with real-time, AeRo has continued the same storyline, with in-game developments starting in 51 AD and continuing up until the present. Some characters have aged and gained themselves a place in the world of Roma, some have retired into history, and others have died the victims of war or political maneuvering. Within AeRo, there is a place for everyone.

Aeterna Roma also currently has an official vlog, run by the lovely Sammich. It can be found here