Referenced By / Tomorrow's Joe
aka: Ashita No Joe 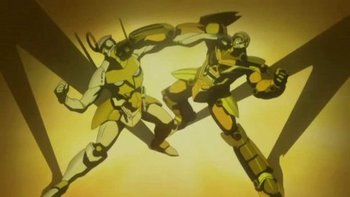 Being a pretty influential anime and manga, Tomorrow's Joe has been referenced many times throughout fiction, especially in its homeland. Expect a lot of references to the Cross Counter or the last scene.

Expect spoilers, not only for Tomorrow's Joe, but other series as well.