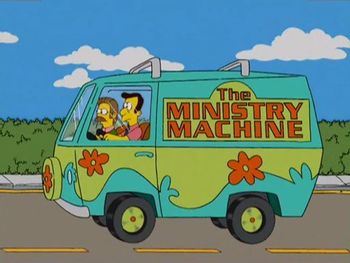 Scooby-Doo is one of the most iconic animated characters of all-time, so it's natural that he get his fair share of homages, parodies and mentions in other media, including tropes like the "Scooby-Doo" Hoax, the Scooby-Dooby Doors gag and the famous You Meddling Kids quote. Sometimes the Wraparound Background and other Limited Animation tropes are spoofed.