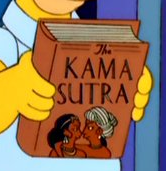 References to the Kama Sutra in Other Works;