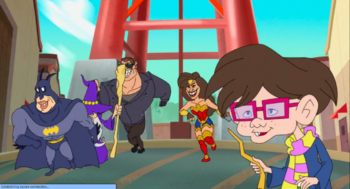 As Harry Potter is an extremely popular and profitable franchise, it was bound to be permeated in pop culture.

D-13: Hey. This is the car from Harry Potter, right? Over.
D-01: Holy crap, you're right. Hey. Command. Uh, so I know you guys are tight asses, but come on. Voldemort isn't gonna defeat himself, you know.