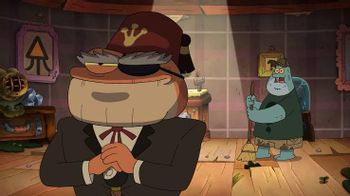 "Say Mr. Ponds, do you get the feeling that we exist simultaneously in multiple parallel universes, completely unaware of the other's very existence?"
Advertisement:

Ever since Gravity Falls became a huge success, several forms of media have referenced the show in various ways.