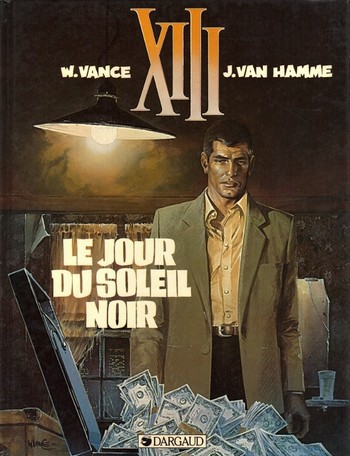 The Day of the Black Sun (in French Le Jour du Soleil noir) is the first album of the comic book series XIII. It was published in 1984.

An old angler, Abe, discovers a wounded man on the shore of the Atlantic Ocean. With his wife, Sally, he brings him into their house and calls Martha, an alcoholic ex-surgeon, for help. The wounded man survives, but he is amnesiac, so he does not know who he is and how he has got wounded. He had no identity papers, so the only clues are a key and a tattoo above his clavicle: the number XIII. The mysterious man recovers slowly at Abe and Sally's for two months, then hitmen show up to kill him.

The Day of the Black Sun provides examples of:

Alternative Title(s): The Day Of The Black Sun