"What If... Doctor Strange Lost His Heart Instead of His Hands?" 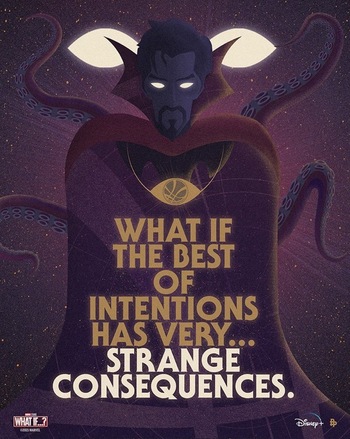 "Love can break more than your heart. It can shatter your mind."

"We have watched how one moment, one choice, can ripple across space and time, giving birth to new stories, heroes, whole universes. But what if it's the wrong choice? What if the best of intentions has very strange consequences?"
— Uatu
Advertisement:

Doctor Stephen Strange offers to drive Doctor Christine Palmer to an award ceremony. However, they get into a car accident, resulting in Christine's death in this reality, while Strange's hands remain intact. Fueled by grief, Stephen sets off into the world to find himself, eventually learning about the mystic arts, and stopping Dormammu. But two years later, he’s still haunted by Christine’s death, leading him to begin a dark journey to gain the power needed to resurrect her, bringing about dangerous consequences as Doctor Strange Supreme.

"What If... Doctor Strange Lost His Heart Instead of His Hands?" contains examples of:

"One life, one choice, one moment can destroy the entire universe."