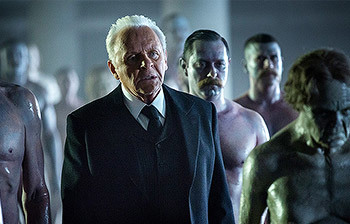 Maeve reveals to Bernard that he is a host and convinces him to let her back into the park, where she meets Escaton and convinces him to help her escape the park. Bernard confronts Ford and forces him to restore all of his memories, and discovers he is a model of Arnold. Bernard attempts to kill Ford; but the latter uses a backdoor in the former's code to force him to commit suicide. Meanwhile, Logan cuts open Dolores's belly to show William she is not real. She manages to escape and run away, finding that the wound is suddenly gone. She reaches the church, where she learns that she killed Arnold. She then encounters the Man in Black. Logan then awakes to find that William has slaughtered all of the Confederados. William threatens Logan into helping him find Dolores. Teddy has a flashback of himself killing host Angela before she kills him. Hale meets the Man in Black, who is revealed to be a Board member, and tries to gain his assistance in removing Ford. Stubbs investigates suspicious activity in the park and is ambushed by Ghost Nation hosts, who are not under control.