Tigerclaw's Fury is a novella from the Tales From the Clans collection that takes place from the end of Forest of Secrets to the end of Rising Storm. 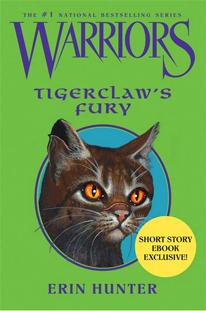 The novella kicks off Tigerclaw's point of view by showing his exile from ThunderClan from his point of view. His injury makes things difficult for him, and he's furious that Darkstripe, Longtail, and Dustpelt are too cowardly to join him. He takes some satisfaction in the fact that Bluestar seems very broken, however. As he leaves, he hears a voice in his head criticizing him over what happened, and he thinks over things. The rogues and ShadowClan outlaws needed more training, and they may have won anyway if RiverClan warriors hadn't arrived. He contemptuously thinks of ThunderClan as a Clan of weaklings: nearly defeated by half-trained rogues, and so willing to hang on every word the kittypet Fireheart said. At this point, the moss he is using for a poultice overflows with blood and he tries to find more, but instead finds something else, leaf mulch, to use. The fact that he'd found something else when the forest denied him moss makes him realize that this echoed his current situation: he may never be a ThunderClan leader, but there's more than one Clan in the forest.

Tigerclaw stumbles out of ThunderClan territory to Treecut-place and lays in an injured, nightmare-filled daze. He awakens a day or more later, hunts, and comes across the scents of the cats who had fought alongside him. He finds them: Blackfoot, Clawface, Stumpytail, and Tangleburr - all former ShadowClan warriors - and a rogue named Snag. Another of them, Mowgli, is missing. They are terrified of him but insist they are glad to have him back, and give him their prey. He begins to order them to hunt and declares that they are going to find more cats and train properly. The next day, he claims that they're too close to ThunderClan, and they move to the unclaimed part of the forest outside ShadowClan territory.

A few days later, Blackfoot and Tangleburr visit their former Clanmates, since they have not seen patrols in days and the two of them are getting worried. Tigerclaw's group is visited by Boulder, Fernshade, and Deerfoot, who tell them again about ShadowClan's sickness. Tigerclaw dreams that night of fighting Fireheart, with shadows rather than cats fighting alongside him. He thinks it is an omen that ShadowClan would help him destroy Fireheart. Tigerclaw offers the next day to bring food to ShadowClan, who accepts. They bring the food the day after that and learn that Runningnose is essentially running the Clan on his own, fulfilling the duties of deputy while Nightstar is ill and no new deputy has been chosen. Tigerclaw spends the next day traveling to Twolegplace and finding Mowgli, promising him one more chance to prove himself.

One day, Tigerclaw leads his own hunting patrol, and chooses to take them to ThunderClan territory. A patrol discovers them, and they attack, killing Runningwind. Whitethroat is shocked and does not retreat when ordered. ThunderClan reinforcements arrive, and we see the scene from Rising Storm when Fireheart chases Whitethroat to his death across the Thunderpath, and Tigerclaw and Fireheart fight each other before RiverClan arrives and drives off Tigerclaw and the ShadowClan cats.

Tigerclaw dreams one night. He wonders if he's in StarClan, but a voice - one he recognizes as one he's heard in his head - tells him that no, he is in the Dark Forest, the Place of No Stars. He turns and finds that the voice belongs to a she-cat named Mapleshade, who encourages him to be a great leader for ShadowClan, and she tells him that she has walked alongside him since his birth. As soon as he wakes up, he remembers her words and rushes to ShadowClan. Nightstar has just died the night before, and Runningnose leads the Clan until StarClan reveals their choice. Tigerclaw offers to support him in the meantime.

Early one morning, Tigerclaw is awakened to the news that the forest is on fire. He rushes across to see what is going on. He is horrified by what is going on: he tells Mapleshade it's because he wants to take revenge on ThunderClan himself and doesn't want to miss that oppportunity, but really he does not wish a death like that on any cat. He hides at the top of the ravine and watches ThunderClan flee the camp. He is shocked to learn that Bramblekit is still caught in the camp, and finds his son clinging to a branch. Tigerclaw is about to rush over and save his son when Fireheart gets there first and climbs the tree, saving the kit on his own. Tigerclaw is grateful that his son's life has been spared, but still hates Fireheart.

A few days later, ShadowClan is still leaderless. Runningnose doesn't know what to do, and Tigerclaw encourages him that StarClan will help him make the right choice. The day before the Gathering, the Clan holds a meeting to discuss what to tell the other Clans. Runningnose finds a claw on the ground - the moon casting striped shadows on it like a tiger's pelt. After the cats cheer for their new leader, Jaggedtooth limps toward Tigerclaw, who notes that the former rogue has a missing claw. Tigerclaw leaps onto the rock to address the Clan: his medicine cats, strong warriors, eager apprentices. He decides to make Blackfoot deputy (not Jaggedtooth; Tigerclaw feels he owes him nothing). He knows he has to prepare for tomorrow's Gathering and meeting Bluestar, but for now he's happy to hear his Clanmates calling him by his new name: Tigerstar!

Tropes appearing in this novella: