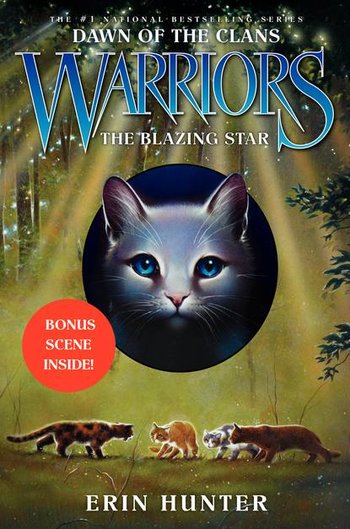 The Blazing Star is the fourth book in the fifth Warriors series, Dawn of the Clans.

Once again, Gray Wing meets with Stoneteller in his dream in the prologue. Stoneteller advises him that things are going to get even more difficult, and that he needs to be flexible to survive.

After the battle at the four trees, the cats bury their dead and agree to meet again at the next full moon, as the spirit cats had asked them to do. Gray Wing declares that Thunder is now a leader equal to Tall Shadow. On the way back to the hollow, a trio of rogues named Holly, Mouse Ear, and Mud Paws join the group. At the next full moon, the cats meet again, and the spirits tell them that "To survive, you must grow and spread like the Blazing Star", without an explanation of what this means.

The following day, Clear Sky meets the kittypet Tom, who asks to join, along with a rogue named One Eye. One Eye seems sketchy, and Mouse Ear warns that Clear Sky will regret taking him in. In the moor camp, the cats find a tainted mouse in the fresh-kill, which Pebble Heart thinks is a sign of a coming sickness. The cats think that perhaps the "Blazing Star" is a five-petaled plant that Mouse Ear knows of, and they go off to find it, but it doesn't give any more hints.

A few days later, Turtle Tail's kit Sparrow Fur decides to go to Clear Sky's group to meet her father. One Eye claims that Sparrow Fur needs to prove herself by fighting him, and that she needs to be taught a lesson. Clear Sky lets them fight, and One Eye nearly kills the kit before Tom jumps into the fight and dies himself. Clear Sky orders the rogue away.

The same day, one of Wind Runner's kits, Morning Whisker, falls ill, and she dies a few days later. Wind Runner and Gorse Fur decide to leave the group. The cats meet to discuss the illness, and afterward Clear Sky returns to his camp to find the kit Alder ill. One Eye's there too, and he declares that he's in charge now, with new rogues to back him up. One Eye orders him to leave, and Clear Sky frees Sparrow Fur and runs with her.

The following day, Thunder spends some time with a she-cat that he'd met a few times before, Star Flower, and she tells him that The Blazing Star is a healing herb. Upon retuning to the hollow, Clear Sky is there, and he explains what happened. More importantly, though, Holly - who is now Jagged Peak's mate and is expecting his kits - is ill, and they urgently need to find the Blazing Star to cure her. They send out an expedition to collect some the following morning, but are attacked and driven away by One Eye and his rogues on the way back. They come up with a plan to lure him out and work together to defeat him.

The plan is put into motion a few days later: Clear Sky challenges him to a fight, one-on-one, with the other moor cats and river cats hiding in wait. But then it turns out that One Eye was ready for this: Star Flower (who One Eye reveals is his daughter) had told him about the plan after she'd learned it from Thunder. The rogues chase them away at first, but they regroup and eventually manage to kill him. While some of them go to fetch the Blazing Star, Clear Sky returns to camp and finds Petal dying of the sickness. They're able to use the flower to save the kits, though, as well as Holly, who has her kits safely.

The leaders have a shared dream in which they meet with the spirit-cats again. The spirits repeat their "grow and spread" message, pointing out that the Blazing Star has five petals like a paw has five claws. Upon awakening, they all meet at the four trees, wondering how "grow and spread like the Blazing Star" and "Unite or die" go together. Finally, Gray Wing says he thinks he understands.

In the bonus scene, we see the Tribe during the events of the book, from the point of view of Moon Shadow's son Sun Shadow. He's always felt the urge to explore, and gets scratched up while exploring a cave. Upon returning to the cave he's lectured by his mother and adopted father, and assigned to look after Stoneteller. When checking on her, she speaks to cats who have died, and he's worried, thinking that Stoneteller will join them soon.

The following day, he looks after her, and she confirms that she will die soon. She tells Sun Shadow that he'll leave the Tribe before the next leader is chosen. He thinks about setting out to find his father, and after driving away a hawk, he feels ready to leave. That night, he slips out, and Gray Wing and Clear Sky's mother Quiet Rain notices him. At that moment, they hear a grief-stricken cry and know that Stoneteller is dying. Quiet Rain urges him onward, and lets him know that she will face the Sun Trail with him.