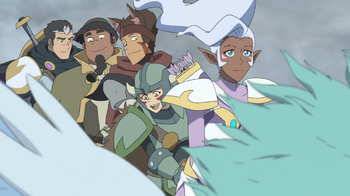 Shiro: Wow, this game is so amazing. It requires problem-solving, teamwork, creativity, all the skills you'd want to imbue when doing team-building exercises.
Lance: Stop trying to ruin our fun with learning!
Advertisement:

During a lull in the conflict, the team sits down for an Altean Tabletop RPG. Hilarity Ensues.