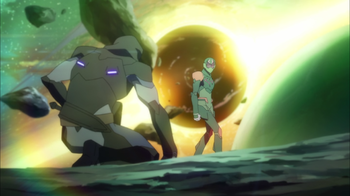 "We have to keep moving. No matter how long it takes."
Keith: I finally understand why you left...you put the mission above all else.
Krolia: That's not true. I left to protect the person I most love — you.

Following up from their last appearance, Keith and his mother track down the source of the Quintessence used to make Ranveig's superweapon.