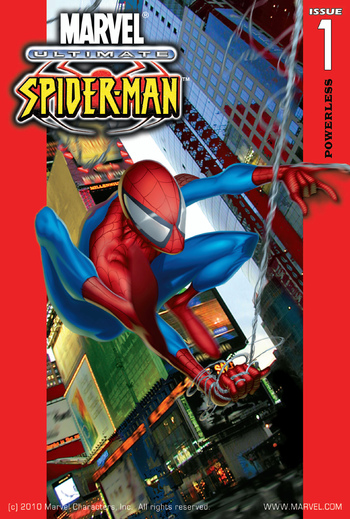 Everything starts here!
"Power and Responsibility" is the first story arc of Ultimate Spider-Man, and the first comic book set in the Ultimate Marvel universe.

A group of high school students visit the labs of Oscorp. A genetically modified spider, used by Oscorp to test their Oz serum, escapes from its containtment and bites Peter Parker, a timid and nerd student. After some health problems he gets better, and realizes that he got super powers. His legal guardians, Ben and May, are having financial problems, so he joins a wrestling arena and seds them the money he got in the prizes. The manager created the "Spider-Man" persona for him. And one day, a thief that Peter did not stop killed Uncle Ben and... blah blah powers, blah blah responsibility, etc; you know that part.

Oscorp kept an eye on Parker and his condition. Initially, fearing that he would die, Norman Osborn sent a hitman to kill him, so that the family would not sue him. Afterwards, they realized that his condition go stable and that he got super powers, Osborn then tried to repeat the incident and give himself powers. He was instead mutated into a huge, terrifying goblin, and ended up killing his wife. He later attacks Midtown High, although it's unknown if he was there to kill Harry or Peter.