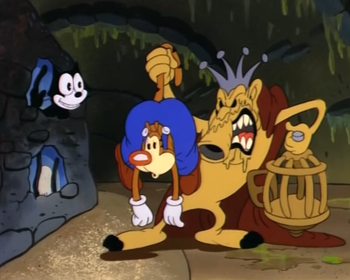 "Welcome to my sewer, cat. I am supreme ruler of all that you see. I own this foul pit of darkness, for I am, the very mighty, Sludge King!"
—The Sludge King when he meets Felix

The first part of the episode starts with Candy Kitty hailing for a taxi, while Felix is busy entertaining someone with shadow puppetry of a woman dancing while a kid asks what he's doing, making Felix shove him aside. Felix asks a patron for change, and then fights his own shadow over it. Felix whistles for his Magic Bag, which he stuffs his shadow into, just as Candy arrives in the taxi. Felix is instantly smitten by her and follows her into the animation studio she works at, Big Deal Productions. Felix wanders around inside looking for her, and eventually finds her. He tries following her, but is startled by the glass of a nearby office door shattering at someone laughing. Felix peeks through the keyhole and sees an animator laughing at his work. When the guy leaves to change his pants, Felix sneaks inside the office and examines his computer to see what was so funny. He hits the return button, and it plays some computer animation of a cat pacing around thinking, and then getting caught by a monster. Felix is unimpressed. Suddenly, his old friend Roscoe shows up in the office. Both he and Felix head off for lunch, with Roscoe admitting he's not sure why he's there. They go outside the building, and Felix notices Candy, who Roscoe says is his sister. Roscoe introduces Felix to Candy, and they decide to all go to lunch together. However, Roscoe accidentally drops a donut he was eating, and he walks off to get it. The donut rolls into a sewer grate, and Roscoe looks inside it. He reaches inside, but is then grabbed by a large, slimy arm and pulled inside. Felix immediately runs off to Roscoe's rescue, heading inside the grate.

Part 2 picks up with Felix investigating the sewers to find Roscoe, failing to notice the sewer rats trailing behind him until they try and sneak attack him. Felix finds a skull drifting through the water and uses his tail to row with it. While rowing, Felix is captured by a group of sludge like creatures, and comes face to face with their leader, who introduces himself as the Sludge King. The creature orders his minions to throw Felix into a cage, where Felix sees Roscoe sitting in a hanging cage. Nearby, the Sludge King belches and demands more Sewer Grog. The minions bring three jugs of it, which the King smashes his fish through and drinks from all three of at once, and then announces he's going to eat Roscoe and then Felix. Felix flashes back to the computer animation he saw earlier, and he realizes he never saw how it ended. Felix then reaches out of the TV and grabs the remote control from the person watching the episode, and rewinds the episode back to where he watched the computer animation. Felix sees the ending, and then fast forwards back to where he was later. Felix yells for more Grog for the king, which the king admits isn't a bad idea. While the King is distracted, Felix bends the bars to his cage and whips out the Magic Bag of Tricks. Just as the King is done eating and notices Felix out of his cage, Felix whips out a gift for the king from his bag—a giant outhouse of the Royal Flush brand. Felix tricks the king into needing to use it, and Felix and Roscoe escape by turning the Bag into a jetski and fleeing past the king's minions back to the surface. Roscoe and Candy reunite at the surface, and Felix whistles for his bag to return back to him. Candy thanks Felix for rescuing Roscoe and kisses him. Just then, Felix hears a horn honking and sees the computer animator from earlier calling for Candy, and it's revealed the two are dating as they drive off. Roscoe comforts Felix and gives him a donut to cheer him up. Felix has a laugh at this as the episode irises out. 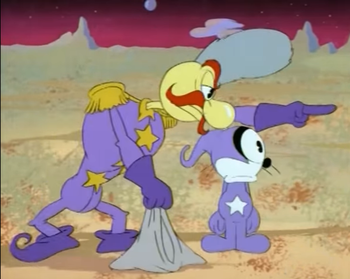 The episode starts with Felix watching some chicken cooking at a cafe, getting hungry. He walks away, but sees an travel agency nearby, which has an offer to see the world for free, with eats included. Felix can't pass up on the offer and walks in, just as an alien inside disguises himself as an average person. Just as Felix has a seat, the alien pulls the lever, revealing the travel agency to actually be a spaceship as it launches into space. Felix reacts with horror at whats going on as the Moon mocks him, pointing out that he is getting to see the world. The spaceship lands on Mars inside of a company called Marzco. Felix is inducted into the workforce by the martian residents, and is ordered to pick bones from nearby. Felix immediately stuffs his new boss in a sack and kicks him away, sending him rolling into the other martians. Felix has a laugh at them as he escapes. Felix sees some cows nearby and disguises himself as a spot on one of them. Unfortunately, Felix unwittingly tears off the clothes of the cow he was on, who alerts the martians to where Felix is. Felix heads deeper inside the planet, and opens a door, where he finds an alien snack bar with a jazz band playing. Felix sees some fish and tries to eat it, but an infant-like patron mistakes Felix's tail for food and bites it, and many of the others try to do the same. Felix ties up their tongues, and after briefly getting eaten alive, he escapes. He rests near a tree, which turns out to be a giant chicken like monster that chases him. Felix gets an idea and lures the chicken inside a cave, tying it up with his tail. The cave turns out to be the nostril of Mars, who sneezes because his nose is tickled by the birds feathers. Felix is blown away and lands on the moon, but the chicken monster follows him. After a brief fight, Felix lands safely back on the moon, and the chicken is reduced to a fried meal for the cat. Felix sits down to eat, but decides to share a drumstick with the moon. Grateful, the moon turns into a canoe for Felix, and Felix uses the other drumstick to row himself back to Earth safely as the cartoon irises out.

Tropes for The Sludge King