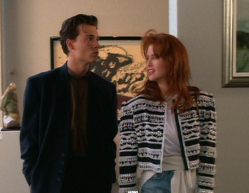 Hanson: There was some trouble. I shot someone. I went to prison.
Linda: And I thought I'd hit bottom.
Hanson: You married him.
Linda: And you work for him.

The team are trying to solve a case of drug dealing and people dying from a drug overdose at a night club. While undercover as a bouncer there, Hanson runs into an ex of his, Linda, who is now married to the club owner. Since she knows his real name, he now is dependent on her to not blow his cover. He soon falls in love with her again, with her reciprocating this. Unbeknownst to both of them, her husband knows of the affair, which puts Hanson in danger. It also soon becomes clear that the club owner isn't just fully aware of and actually encouraging the drug dealing, but also committing (tax) fraud.