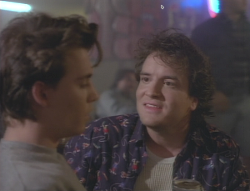 Hanson (and by extension, Penhall) gets into trouble with the police department for participating in illegal street races while undercover when he wasn't supposed to. Hanson and Penhall both are sent back to the police academy. But then Hanson's friend from the past, Russell Buckins, shows up.

Instead of going to the police academy like he's supposed to, Hanson impulsively takes off with Russell to go to the wedding of Debbie, a former flame of Hanson's. Russell is pressing Hanson to seduce Debbie before she marries.

Meanwhile, Penhall, who does go back to police academy like he's supposed to, gets assigned a jerkass partner, and Ioki and Hoffs are trying to find Hanson.