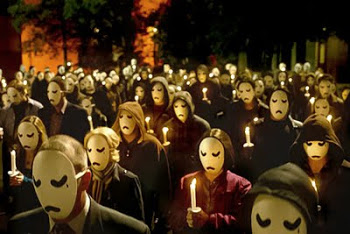 The Whoniverse's equivalent of Anonymous. (Not really, but just as flippin' creepy.)

Now on the run, Rex and Esther are rather forcibly roped into becoming Torchwood members, and they gather in a makeshift Hub. Rex is not happy with being part of Torchwood, partly because he's just naturally grumpy, partly because he hates Jack, and partly because his chest wound is causing him constant agony. Esther just wants to go see her sister, who isn't well — although she doesn't elaborate for now. Rex manages to sneak into CIA director Friedkin's house and take his phone by force. When the phone finally rings, it becomes apparent that Phicorp is linked to it somehow.

Jack's earlier wounds are getting infected, and he's very worried by now. The group realises that when the wounded don't die anymore, the earth would become a massive germ incubator. Other medical repercussions also become apparent: for one, the normal 50% in-utero mortality rate of severely disfigured fetuses is no longer in effect. Several countries have already greenlit contraceptives in the water, with unknown medical results. Meanwhile, supermarkets are being raided, pain killers are still impossible to come by, and the white mask cult is growing stronger.

The new Torchwood infiltrate Phicorp, and discover a massive stockpile of pain killers. Gwen and Jack would prefer to keep the information to themselves for now, but Rex insists on doing something with it, and calls a friend though a number of proxies to get help.

When Rex' friend turns out to have called the cops on him instead of helping them, both Jack and Rex decide to just call it a day and leave Gwen and Esther to their own devices. While Gwen and Esther walk back to the Hub and become friends, Rex visits Dr. Vera Juarez and tries to blackmail her for more pain killers and a new dressing for his wound. The blackmail quickly turns into banter and the banter quickly turns into rather explicit sex.

Meanwhile, Jack decides to enjoy his newfound mortality, goes on a complete bender, and manages to pick up a hot male bartender in under a minute. And so, we finally get to see Captain Jack Harkness getting fucked, which is both surprisingly explicit and utterly magnificent. And he insists on using condoms.

Some time later, while the bartender is asleep, Jack drunk dials Gwen. She and Esther are still at the Hub, working diligently all night and trying to find out more about morphic fields. Gwen correctly guesses that Jack is heartbroken over the fact that Ianto had to die before Miracle Day would have saved him. But she hangs up on him when Esther, using a whole lot of proxies, manages to get her a secure webcam connection to Rhys and Anwen.

The next day, Jack stumbles into the Hub with a massive hangover — his first one in millennia — while Rex discloses that he's convinced Dr. Juarez to help them.

Dr. Juarez decides to take Jilly up on her invitation to attend a Phicorp presentation. Gwen sneaks in as well, using Torchwood's trusty old camera contact lenses. Rex would have preferred to go, but Gwen lies to him and says that the lenses are bio-linked. Also attending is Oswald Danes, who by now has publicly stated a tearful apology on live TV for raping and murdering a child. While Gwen hacks into Jilly's computer, Phicorp announces that it's convinced a U.S. Congressman to try and make all pain relief drugs legal without prescription. Danes is paid to state on live TV how much he loves that plan.

Jack, who knows what it feels like to murder a child, doesn't believe him, but since Danes now has protection from Phicorp as their public spokesperson, Jack is badly beaten and left in the street.