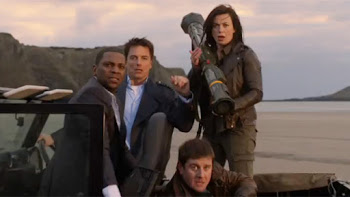 The return of Torchwood, now with 25% more badass.
Rex: Who the hell are you people?
Gwen: Torchwood.
Advertisement:

One day, the word "Torchwood" is emailed all across the world, only to be quickly deleted again as soon as CIA internet analyst Esther Drummond (Alexa Havins) gets on the case. Frustrated, she phones the hard-boiled, no-nonsense CIA agent and Scary Black Man Rex Matheson (Mekhi Phifer), who dismisses Torchwood as completely irrelevant. He promptly gets into a car crash and gets impaled by a very large metal bar right through his heart, but to his shock, he remains conscious.

In the hospital, Dr. Vera Juarez (Arlene Tur) explains to Esther that Rex isn't dying. And neither is anyone else. Not anywhere in the world for the past 24 hours. This quickly propels convincted child rapist and murderer Oswald Danes (Bill Pullman) into infamy, when his execution just leaves him in prolonged agony. Danes decides to use his execution as a legal loophole and tries to become a media darling.

Gwen, Rhys and their baby daughter Anwen are living a quiet seaside life in the witness protection program. On Miracle Day, Gwen gets a phone call from Andy, telling her that her father suffered a heart attack. She comes out of hiding, and when she learns what's happening all across the world, she aches to jump in and help. Rhys won't let her, because Anwen needs to come first now.

Esther decides to investigate Torchwood, and eventually happens on Jack's files with some help from co-worker Charlotte Wills. Unfortunately, people notice, and she encounters a suicide bomber. Fortunately, Jack has beamed back to earth, saves her life, douses her with Retcon and notices with shock that jumping out of a window has left its marks on his body. And that he's not magically healing. And he can't know yet whether he's truly mortal now or just as immortal-but-fragile as everyone else.

Despite the Retcon, Esther still manages to figure out a link between the exact moment the last person on earth died and the exact moment the word "Torchwood" was emailed across the world. However, her superior, Brian Friedkin (Wayne Knight), is getting orders from some unseen entity that's decidedly not part of the CIA.

Global consequences very quickly emerge. Food supplies and birth rates are calculated and the resulting Malthusian economic issues become apparent, wars and truces change within minutes, hospitals are completely overrun, and the entire legal system will need to be revised.

Jack manages to sneak into a hospital investigation also attended by Dr. Juarez, where he poses as "Dr. Owen Harper, FBI". The doctors uncover the severely mutilated body of the suicide bomber. His remains are spread out across the table, scorched, stretched, blackened, smashed — his neck hanging by a few thin threads while his eyes dart about wildly. Jack suggests severing the head to see what would happen. Although Dr. Juarez protests, the head is cut off and the man remains just as conscious.

Rex, who has hacked into the security camera from his hospital bed and seen the whole thing, rips off all of his medical gear, limps out of his hospital bed with several gaping wounds and takes a plane directly to the UK to go fetch whatever's left of Torchwood. He's accompanied by CIA operative Lyn Peterfield.

Gwen, Rhys and baby Anwen face assassination, but as Jack just happened to meet Rex on the plane, he's able to save them. One tense helicopter chase later, they're eventually captured (with the help of Andy, who's still just following orders).

And where's the 25% more badass? Here she is! note 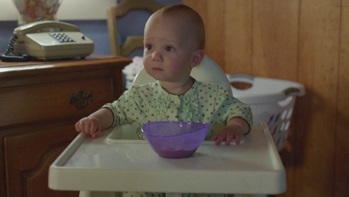 Anwen Williams. ...What? She's the daughter of two badasses, so there you go!