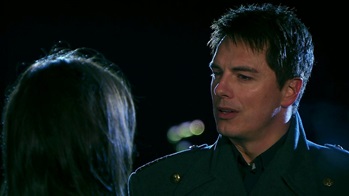 Jack says goodbye to Gwen before heading for the stars to go drown his sorrows in a space pub.
There's one thing I always meant to ask Jack. Back in the old days, I wanted to know about that Doctor of his. The man who appears out of nowhere and saves the world. Except sometimes he doesn't. All those times in history when there was no sign of him, I wanted to know why not. But I don't need to ask any more. I know the answer now. Sometimes the Doctor must look at this planet and turn away in shame. I'm recording this in case anyone ever finds it, so you can see... You can see how the world ended.
— Gwen Cooper's faith in humanity collapses
Advertisement:
Gwen: (voice quivering) ...Are you ever coming back, Jack?
Jack: What for?
Gwen: Me. It wasn't your fault.
Jack: I think it was.
Gwen: No.
Jack: Steven and Ianto and Owen and Tosh and Suzie and all of them, because of me.
Gwen: But you saved us. Didn't you?
Jack: I began to like it. And look what I became. Still, I have lived so many lives. It's time to find another one.
(He touches a button on his bracer.)
Gwen: (tearing up) They died, and I am sorry, Jack, but you cannot just run away. You cannot run away.
Jack: Oh yes, I can. Just watch me.
(Jack is beamed into space)
— Jack Harkness... leaves the Earth behind

Gwen wonders why the Doctor isn't saving them. She concludes that he must be turning away in shame, seeing what the Earth is about to do.

Many children are going back to school now, not knowing that they'll be carted off by the busload. Gwen and Andy visit Ianto's family to tell them of his death, and to let them know not to let any of the neighbourhood's children out of sight. Ianto's sister and her husband quickly round up the neighbourhood's children and guide them into a large empty shed. Gwen has decided by now to abort her unborn child, since it should not grow up in this kind of world.

UNIT discovers that the 456 don't need children — children just feel good. They're literally getting high off of huffing small kids.

The military starts to hunt down children that didn't go to school. The children hidden in the shed are found, and Gwen tries to escape with them, but fails. Andy finally realises that something horrible is going on, takes off his jacket, charges into action to protect the children... and is promptly beaten to a pulp by the military.

The government needs to present itself as victims rather than villains. To achieve this, Frobisher is ordered by Green to publicly appear as a father whose children were taken unexpectedly by the 456. Frobisher asks Bridget Spears to retrieve a package for him.

Bridget Spears visits Lois, who has been put in a jail cell. She tells her:

Advertisement:
He always worked hard. I don't think that's valued enough these days, hard work. And he was a good man. I want you to know that. John Frobisher was a good man. Because when the history of this is written, they'll talk about the ministers and the soldiers and the things with numbers for names and I think people will forget how very good he was. I want you to remember him like that. If ever you think of John Frobisher, just remember that it wasn't his fault.

Frobisher goes home, kisses his wife and two daughters, unwraps the package to reveal a gun, and closes the door behind him. Four shots are heard.

Jack meets Dekker and tries to figure out how to hack into the 456's frequency. They can kill the aliens by powering up the radio system through a child. Any child. But it would have to be right now. And the only child in the entire facility is Steven, Jack's grandson. He makes the most devastating decision of his life. Steven is hooked up to the machine screaming, the 456 all across the sky explode, Steven dies and Alice utterly breaks down.

Prime Minister Green is quite happy with the cover-up and merrily prepares to blame the USA for everything. That is, until Spears reveals that she's wearing Lois' lenses, and has recorded the whole thing. Home Secretary Denise Riley MP will make sure that Green's actions will be made public.

Alice sees Jack. She can't bear to look at her father, and simply walks out of his life forever.

Six months later. Gwen is still very pregnant. She and Rhys meet up with Jack, who has been Walking the Earth. However, the Earth is too small to make him forget what he did, and he says his goodbyes and beams up into space. There are several hints of his former Torchwood colleagues' themes as he remembers each one who died, deciding that Torchwood is now gone, and it is time for him to go. Jack signals for a cold fusion cruiser to take him away from the Earth via teleport, and Gwen starts sobbing very heavily in despair. Rhys embraces her as tenderly as he can and tells her they should go home. She tries to smile back at his affection and the two head back to their own lives.