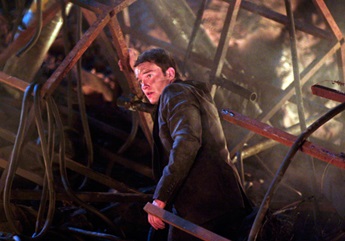 Pictured: An explosion-battered Ianto Jones and the Hub- well, what's left of it anyway.
Rhys: Oh, God, this is uncomfortable. Bloody torture, man. How are you, love?
Gwen: My best friend's belly had a bomb go off in it last night. Someone's been trying to kill us ever since. I'm travelling at seventy miles an hour on top of a bed of potatoes, and I think I'm going to be sick.
Rhys: Travel sick, is it?
Advertisement:
Gwen: When have you ever known me to be travel sick?
Rhys: Well, when have you ever travelled like this? On an empty stomach. (Gwen looks at him suggestively) What? What?
Gwen: You know some announcements you rehearse in your head?
Rhys: Yeah.
Gwen: Yeah. And this wasn't quite what I had in mind.
Rhys: What do you mean, announcements? (catches on to her hints) Oh, God, no.
Gwen: Yes.
Rhys: Oh, bloody hell, no.
Gwen: Yes.
Rhys: Oh, come here. Oh, my God. Oh, I don't believe it. (they hug in delight)
— Rhys figures out his wife Gwen is pregnant

Gwen and Rhys are on the run, being hunted down by Agent Johnson and her anti-terrorist squad. Andy reluctantly helps them, but he can't believe that Gwen would be a threat to the nation. Ianto is also on the run, and his sister's husband and his group of stout Welsh lads are able to create a diversion.

Jack's remains (an arm, a leg and what's left of a head) are gathered up by Agent Johnson. Alice, Jack's daughter, frantically tries to call him.

The children chant in unison again: "We. We are. We are coming. We are coming tomorrow." John Frobisher's kids laugh it off, as do most of the other children on the planet. Frobisher still can't tell them what's going on, as it's all top secret. He hasn't slept and barely has time to eat: he knows that he's about to be involved in the biggest cover-up in Earth history.

Jack's body slowly starts to regenerate. He doesn't look quite as pretty without his skin and meat and organs. Agent Johnson knew what to expect, although she's bit squicked out by it. She handcuffs the half-formed Jack to a wall.

Gwen tells Rhys that she's pregnant, finds a place for them to hide in London, and tries to contact Frobisher. She gets Lois on the phone, who is sneakily browsing government files and a bit confused by why Torchwood would be on the run if they're the good guys. Lois tricks Gwen and Rhys into meeting her at a London snack bar, hoping to get more information. But she's not willing to risk anything more for now. Gwen likes her immediately, and tries to persuade her to help them further. Lois just buys them dinner for now.

At MI-5, Frobisher, Bridget and Lois Habiba see an unknown device being built by Mr. Dekker, the scientist in charge. It's meant to contain the 456, and the air inside it is smoke and poison. Lois finds out that the aliens have been on Earth before and that there's a massive cover-up going on.

Jack is alive again, albeit without much of his skin. He's in absolute agony as he continues to regenerate. It doesn't help much — as soon as he's back to full health, the anti-terrorist department encases him in concrete. However, Ianto manages to kidnap the giant chunk of concrete and throw it off of a cliff, and Jack emerges, naked and a bit traumatized.