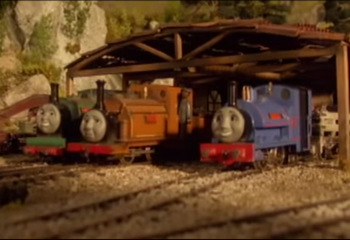 On a cold winter night, Thomas entertains the other engines with the story of the forgotten Mid-Sodor Railway.

Long ago, there were three engines who lived on their own railway. Their names were Duke, Stuart, and Falcon. Duke was the oldest of the three and had been named after the Duke of Sodor. Duke felt very proud of this and decided it was his responsibility to keep the younger engines in order. While other engines came and went, Duke outlasted all of them. Stuart and Falcon gave Duke the nickname "Granpuff" and were very fond of him, but did sometimes tire of hearing about "his Grace" and would occasionally tease him.

Duke warns Stuart and Falcon that if they do not behave they could end up like Smudger. Stuart and Falcon are curious about Smudger, so Duke tells them about him. Smudger was a show-off, who ran roughly and often derailed, spilling his loads. Duke tried to warn Smudger, but Smudger simply did not care and laughed at Duke. But he quickly stopped laughing when the manager told Smudger he was going to be useful one way or another. Smudger didn't laugh at that and from then on, the only running Smudger did was running as a generator behind the shed. He never went on the rails again.

Stuart and Falcon began behaving better and all three remained friends for years. However, this all ended when hard times came. The mines that the engines depended on for work closed and the railway soon followed. As a result, the engines were all put up for sale. Stuart and Falcon were bought together, but no one wanted to buy an old engine like Duke. Stuart and Falcon promise Granpuff they will find another railway for him to run on.

The story is continued in the next episode, "Sleeping Beauty."