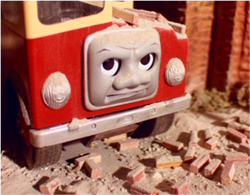 A special holiday is being celebrated and many visitors are traveling on Duck's Branch Line. At Tidmouth, Duck meets a double-decker bus, who threatens that one day rails will be ripped up. Duck warns Oliver, who takes his threat with a pinch of salt and nicknames the bus "Bulgy". But later, Oliver becomes concerned when another bus comes to help Bulgy. Then the two Great Western engines see Bulgy pretending to be a railway bus and are furious. Duck chases after him and finds Bulgy stuck under a bridge. Duck cautiously crosses the bridge and takes Bulgy's passengers home, but Bulgy never learns sense. And when no one believes him anymore, he is turned into a henhouse.