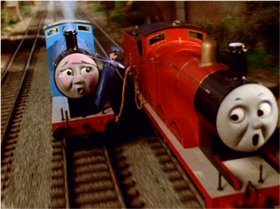 One day, James is forced to wait in a station for Edward to arrive with his train which makes him angry with the blue engine. When Edward arrives, James grumbles and leaves to continue his work. Afterwards, James puffs to the shed, still grumbling. He complains to Thomas and Percy that Edward clanks about like a lot of old iron and is so slow hr makes engines wait. Thomas and Percy, who both have a great deal of respect for Edward, are angry at this remark and tell him that Edward could beat him in a race any day. James scoffs at this, before returning to his berth in the shed to rest.

The next day, James' driver suddenly falls ill while at work and is sent home. With only his fireman on duty, James is relegated to shunting for the day. The fireman leaves James to get ready for the day's work when the signalman spots James leaving without anyone aboard. He quickly sets the points and signals to halt traffic down the line and tells the fireman what has happened. It emerges that two boys were seen on James' footplate fiddling with his controls, only to run when James started. The signalbox phone rings, with an engine inspector on the other end. When the Call is over, the Signalman tells the fireman to quickly get a shunter's pole and a coil of wire rope.

The inspector soon arrives in Edward and the fireman is ready with the pole and the rope. With James' fireman and the inspector aboard as well as his normal crew, Edward sets off promising to catch up to the runaway engine.

James meanwhile sails through Knapford and still doesn't have a clue that anything is wrong and is enjoying his long run. His happiness doesn't last much longer though, as he feels himself starting to go faster and faster causing him to realise that he doesn't have a driver aboard. His joy turns to horror and James starts to call for help. Edward speeds through Knapford and races down the line as fast as he can in order to catch up to James. Soon the two engines are almost side-by-side with Edward giving it everything he can to keep up. Edward's driver does his best to keep Edward steady while the inspector climbs outside and makes it to Edward's front with a noose of rope tied through the crook of the shunter's pole and tries to slip the rope over James' left buffer. It's difficult for the inspector, but he finally manages to lasso the buffer and pull it tight. James' fireman scrambles over to his engine and takes control, allowing both engines to finally slow down.

As the two engines make their way to the next station, James apologises for his harsh words earlier. Waiting for them both is the Fat Controller. He congratulates the crew on a fine rescue and then tells James that he can rest before continuing his work. As for Edward, he's going to be rewarded with a trip to the works to get his worn-out parts mended. Edward is very happy and notes how nice it'll be to get to run without clanking.