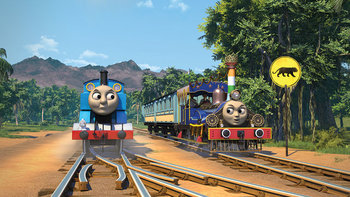 Thomas and Rajiv both take a detour through the Indian jungle in order to see some tigers. But when Thomas spots that Rajiv's passengers have an empty tiger cage with them, he sets out with the help of Rajiv and Shankar to find the tigers and make sure that none of them are captured.