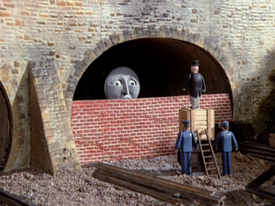 Once an engine attached to a train
was afraid of a few drops of rain.
He went into a tunnel,
and squeaked through his funnel,
and wouldn't come out again.

It's a very rainy day on Sodor, and Henry is pulling some coaches full of passengers. He runs into a tunnel and stops.

Henry's driver and fireman argue with him but he refuses to come out, claiming that the rain would spoil his green paint with red stripes. The guard blows his whistle and waves his flag, but Henry instead blows steam at him.

Just then, an important man arrives in another train. It's Sir Topham Hatt; better known as the Fat Controller. He decides that Henry will be pulled out of the tunnel. Attaching a rope to Henry, all the passengers try and pull him - except for the Fat Controller, citing that it's his doctor's orders - but Henry doesn't move. Moving to the other end of the tunnel, the passengers try to push Henry out, but with the same results.

Thomas arrives to help, and the passengers try telling Henry that the rain has stopped. Henry still refuses to move, believing the rain will begin again soon, so Thomas tries to push Henry out, but even with another engine pushing, Henry remains in the tunnel.

The Fat Controller admits defeat and tells Henry that he is going to get what he wanted. Soon, the rails are taken up, and a brick wall is erected in front of Henry.

All Henry is able to do now is to watch the other engines pass through the other tunnel. Henry soon regrets his actions, as he sees Edward and Gordon run by. Edward always toots a hello with his whistle, while Gordon always laughs saying it serves him right. Henry has no steam to answer them, and the soot and dirt from the tunnel ruins his green paint with red stripes anyway.

Henry is left in the tunnel cold, dirty and lonely. He now wonders if he will ever be let out to pull trains again.