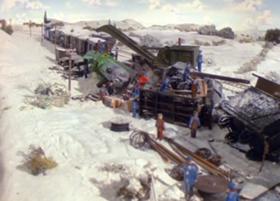 One night in winter, after his day's work is done, Henry is told by his driver that they'll be leaving early in the morning to pull "The Flying Kipper", a train that carries fish from the harbour to the mainland. The driver tells Henry that his special coal is working so well that if he pulls the Flying Kipper nicely the Fat Controller will let him pull the express, a thought that makes Henry very happy.

Early next morning, Henry arrives at the quay ready to pick up the Flying Kipper. Everything goes very smoothly and Henry leaves the harbour without a hitch. After getting the vans to come along quickly and quietly, Henry quickly begins to enjoy his journey marvelling at the countryside as the sun rises.

Soon Henry comes to a yellow signal indicating caution. Henry's driver initially prepares to stop, until he sees the home signal is down meaning that the line ahead is clear. With that, the driver allows Henry to continue at full speed. What Henry and his crew don't know however, is that the points from the main line had been frozen to a siding and the signal, which should have been set at "danger", had been forced down by snow.

In the siding is a goods train which had pulled in to let Henry and the Flying Kipper pass and the engine's crew is enjoying cocoa in the brakevan. However the crew notices that it's nearly time for Henry to pass by, so the crew leaves to return to their engine. Their escape comes just in time, as Henry comes flying down the siding at full speed and, unable to stop, crashes straight into the train causing a massive wreck which completely destroys the brakevan and causes Henry to derail.

A few hours later, the clean-up effort is underway. Henry's driver and fireman had jumped clear before the crash, but Henry is left on his side dazed. The Fat Controller comes to talk to Henry and kindly reassures him that the accident wasn't his fault, but was caused by the weather. He then tells Henry that he is going to be sent to Crewe, an excellent place for sick engines. As well as repairing him, they will also give him a brand new shape and a larger firebox. As a result, Henry will feel much better and won't need special coal anymore.

A few weeks later, Henry returns from Crewe. Although he enjoyed his time there, he is happy to return to the Island of Sodor. A lot of people wait at the station to welcome him home and see him in his new shape. When he rides through, he looks so splendid and strong that the crowd gives him three cheers much to Henry's gratitude. A lot of children are now often late for school as they want to wait to see Henry ride by and often see him pulling the express. He is able to pull it so well that Gordon feels jealous, but that's another story.