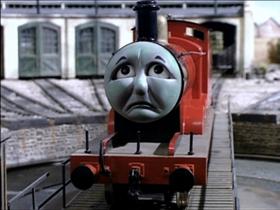 Not shown here: The out-of-control, much-too-fast spinning that James just came out of.

Life in the yard has become harder since Thomas left to run his branch line. Without a tank engine to shunt or be a station pilot, Henry, James and Gordon must fetch their own coaches. Soon, the big engines begin to express their outrage by shouting "Tender engines don't shunt!" Their complaining doesn't please the Fat Controller.

At the junction, Gordon tells Thomas about how tender engines are important and shouldn't be shunting coaches from dirty sidings. Thomas, however, isn't quite concerned about his issue and the two leave with their respective passenger trains.

Later that day, Gordon heads for the turntable by the sea, but the wind off the ocean is so strong that it keeps the big blue engine from properly balancing on the turntable and it becomes very difficult for it to turn. Neither his driver nor his fireman can get him in a proper position, nor is Gordon particularly trying; the crew try so many times until they give up and decide to pull his next train tender-first.

When Gordon arrives at the junction, a group of boys joke around and tease Gordon by calling him a tank engine. Thomas, who is waiting at the junction, laughs and suggests that Gordon should "scrap his tender and get a nice bunker". James, who passes by with his passenger train, laughs at Gordon, too. Gordon warns James that he might stick on the turntable, too, but James claims that he won't because he's not as fat as Gordon.

When James arrives at the sheds, he lines up on the turntable perfectly... a little too perfectly, it turns out, as the strong ocean wind begins to spin James around uncontrollably like a top. Gordon arrives just in time to see the whole thing and as the turntable finally stops, Gordon asks James if he was playing roundabouts. James doesn't say a word and backs into the shed feeling very dizzy and completely humiliated.

That night, Gordon, James, and Henry hold an indignation meeting. They make a decision that it's best that, tomorrow morning, they start going on strike.