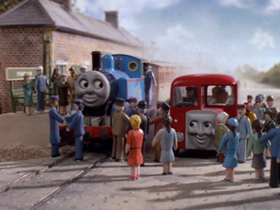 Thomas is waiting at a junction when a bus drives up alongside. The bus introduces himself as Bertie, who remembers Thomas from the time he took his passengers home after Thomas crashed into a snowdrift, and that he's come to help his passengers. Thomas claims that he can go faster than Bertie. Bertie then challenges Thomas to a race. The drivers agree to the race, and Thomas and Bertie begin their race.

Bertie draws in front at the beginning of the race, until he reaches the level crossing, where Thomas passes him and takes the lead in the race, and after that, the road leaf the railway, and Thomas stops at the next station to collect passengers. He tells them to get in quickly, and as he starts off again, he seeing Bertie zooming over the bridge and taking the lead. Thomas tries to catch up, but he has to stop at the next station. Thomas now feels sure that he'll lose the race, but he feels better after a drink and starts off once more.

Thomas manages to catch up to Bertie and takes the lead as he passes Bertie at the tunnel and makes it to the last station, winning the race. Everyone celebrates Thomas' victory, but they give Bertie a big cheer too. Bertie congratulates Thomas and tells him that to beat him over that hill, he would have to grow wings and be an airplane.

The two friends often talk about their race, but Bertie's passengers don't like to be bounced like peas in a pod, and The Fat Controller warns Thomas not to race at dangerous speeds.

The narrator then tells the audience that Thomas and Bertie would like to have another race, but doesn't think they ever will. Or do they?