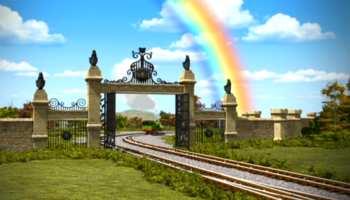 After a couple of misfortunes involving a torn sack of mail and some cargo on the line, Percy feels as though he has bad luck. Stephen gives Percy a horseshoe to represent as a lucky charm to help him regain his confidence, but when Percy realizes that he lost the charm, he has to find confidence in himself to help pull Bill and Ben back onto the rails.