Adapted from: Oliver the Western Engine, "Resource and Sagacity" 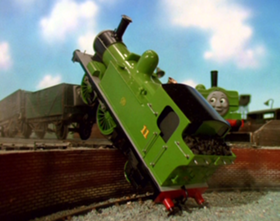 Oliver is still new to Sodor and tells Duck how very grateful he is that Douglas rescued him and Toad from being scrapped on the Other Railway. That night, Gordon, James, and Henry praise Oliver. Unfortunately, Oliver, who has never been complimented by big engines before soon becomes puffed up in the smokebox.

After pulling some coaches to Tidmouth, Oliver is told by the Fat Controller that he must learn how to handle trucks. However, Oliver is so confident in himself that he ignores the other engines warnings. Duck tries to convince Oliver, but Donald suggests that Oliver should learn for himself. After arranging some loaded trucks and then shunting empties to the hopper, he goes back to take the loaded trucks. But, the loaded trucks do not want Oliver, preferring Duck, Donald, or Douglas instead.

Oliver bosses the trucks about and takes them anyway. But the trucks decide to show Oliver who is boss by forcing him down the tracks. Oliver puts his weight against the trucks, but they still push him on, unaware of the danger ahead - he is heading towards the turntable. Then the inevitable happens - Oliver ends up bunker-first in the turntable well.

Duck is very concerned about Oliver's predicament as now Donald and Douglas will have to work without the use of the turntable. That night, the breakdown train rescues Oliver. The Fat Controller says that Oliver has a lot to learn about the troublesome nature of trucks and Oliver agrees.

Once home from the works, Oliver is a much wiser engine and knows how to handle trucks.