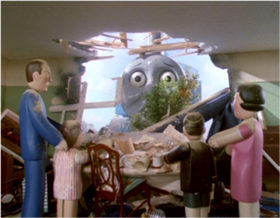 "Just look what you've done to our breakfast!"
Advertisement:

Thomas' driver jokes that Thomas could almost run his branch line without him. Thomas doesn't realize he's joking though and becomes very conceited. He brags to Percy and Toby later at the sheds and both tell Thomas that he needs a driver, but to no avail.

The next morning, a fire lighter comes and starts the engines' fires. Thomas wakes up as the warmth spreads through his boiler and then realizes his opportunity to run by himself and prove Percy and Toby wrong by stopping and wheeshing in front of them. Thomas slowly starts moving along the track, but doesn't know that he's only moving because a careless cleaner has fiddled with his controls. Thomas realizes he can't do anything about it without his driver. At the end of the tracks sits the stationmaster's house. Thomas crashes through the front window just as the family is sitting down to breakfast. Plaster and broken glass are everywhere - the stationmaster's wife is furious with Thomas for ruining their breakfast.

After workmen lays rails through the garden, Donald and Douglas arrive and pull Thomas free of the house. Thomas' front has been badly damaged by his visit and is in disgrace.

Back at the shed, the Fat Controller tells Thomas off for his actions and tells him that a diesel railcar is going to be brought in to run his branch line while he's sent to the works for long repairs.