U.S. Title: Henry to the Rescue

Adapted from: The Three Railway Engines, "Edward, Gordon, and Henry" 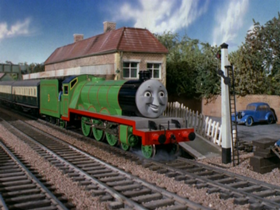 Gordon always pulls the big Express and is proud to be the only one strong enough to do so. One day, he heads down the line, when he sees Henry's Tunnel. Henry feels sorry for himself and begins to wonder if the Fat Controller will ever forgive him and let him out again.

Gordon plans to whistle rudely at Henry, but goes so fast that his safety valve bursts and is forced to stop just in front of the tunnel. The Fat Controller is cross and orders for another engine to come take the Express, while Gordon is uncoupled and moved onto a siding. Henry saw what happened and can only laugh.

Edward is summoned to take the express, but he isn't strong enough to move it. Gordon suggests that Henry should be let out of the tunnel to pull it and the Fat Controller agrees. Henry is freed from the tunnel and pulls the express with Edward pushing from behind. The Fat Controller sticks his head out the window to wave to the engines, but his hat is blown off into a field and eaten by a goat. The two keep running until they reach the station at the end of the line, and on the way home help Gordon back to the sheds.

Henry is rewarded with a new coat of paint and now knows that he doesn't have to run into a tunnel to keep his paint dry, but still asks his driver to give him a washdown after the day's work was done.