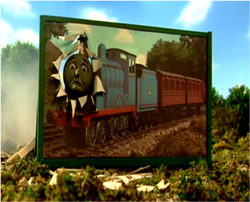 James is shocked to discover Edward has been chosen to appear on a railway poster. He tries to be as good as Edward by treating his trucks nicely and being useful, but he is held up after being cleaned, and is afraid Edward will finish his passenger journey before him. James uses the main line to get ahead of Edward, but when he goes onto the same line as him he stops suddenly for a signal and Edward is unable to stop in time. Edward therefore bumps behind James and James is pushed forward, ironically, into Edward's railway poster. Although Thomas jokes he is the poster engine now, the Fat Controller is less than impressed and tells James the children will be unable to visit the seaside now that Edward is damaged. However, James acts as a backing engine for Edward.