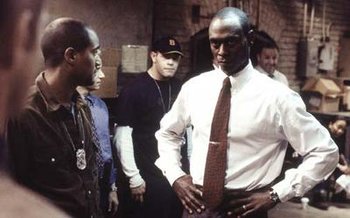 "You cannot lose if you do not play."
— Marla Daniels
Advertisement:

The brass tries to downplay William Gant's murder so no one will think he was murdered for his testimony, but McNulty, once again, tells Judge Phelan, and even though he urges Phelan not to tell the press, they find out anyway. McNulty and Bunk, meanwhile, try to rattle D'Angelo's cage by visiting him in the pit, putting him in an interrogation room, and then trying to get him to write a letter to Gant's family, but Levy shows up to put the kibosh on that, and Avon chews D'Angelo out for even thinking about Gant's murder.

Bubbles agrees to work for Kima as an informant again, and with a simple trick (putting hats on any viable member of the Barksdale crew), helps the detail, and impresses McNulty. On the other hand, McNulty and Daniels are still at loggerheads, and Herc, along with new detail member Roland "Prez" Pryzbylewski (Jim True-Frost) and a reluctant Carver, go to one of the towers to make arrests, only to find themselves in hot water when Prez hits a teen in the eye with his gun, and a riot breaks out.