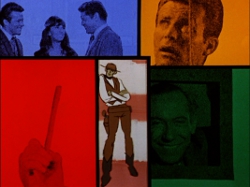 Wanakee, daughter of the chief of the Blackfoot tribe, has been kidnapped and a note demands that West and Gordon come to Grave Town or she will be killed, while her fiancé and her father threaten war if she is not brought back within three days. When the agents arrive they find that Dr. Loveless is behind the plot; he captures them and eventually reveals that he has a new invention which he wants to test on West - shrinking powder.